I am a beginner in javascript and react. I’m trying to refactor the class component into a functional one (Rules for Yahtzee game scoring).

This is class component:

This is my non working refactored code:

Unfortunately, I am struggling to make this work, can someone help me, what am I doing wrong here?

What is the error you are seeing in the console?

You can see what this is all about here at this link: Yahtzee - Codesandbox

I see this error in the console:

There are no react components in your code. These are all just normal JavaScript classes. You can’t convert them to react functional components.

I will reformulate the question since I did not express myself well. I want to rewrite the code from above using traditional function-based syntax. Something like this: Sub classing with extends

When you say “something like this” do you mean like that but not using classes (because that link uses classes)?

And are you trying to be functional or just not use classes? What exactly are you after in attempting this conversion?

I’m trying that Rules be functional not class.

If you’re trying to be functional then you want to think in terms of functions. You kind of started off that way (function sum(dice)...) but then you went into objects (const TotalOneNumber = {…) and then continued to try to new things which is going back to instantiating classes - classes which you should no longer have, and actually don’t, hence the errors.

The somewhat tricky part here is dealing with your parameter state, namely val, description, count, and score. count, by the way, is a bad parameter name because it conflicts with the count method. Luckily, this state never changes so it should be pretty straightforward to make function versions of these classes/methods since its all just inputs producing outputs with no side effects. What was state can now be just another input.

… actually it looks like steve.mills is replying so I’m going to see what happens there before I continue (I have some errands to run now anyway

The basic premise of functional programming is:

This is great for back end data base type operations where performance is not critical but correctness is.

Even Rust a systems level language is immutable by default and supports higher order functions.

However for 95% of all front end JS, functional programming is unnecessary and bad for performance.

FP is great to learn and makes you a better programmer in 2 key areas:

If you really want to learn Functional Programming in JS Brian Lonsdorf has a course on Front End Masters, Egghead IO and a book thats free. Be prepared to go down the rabbit hole.

I personally wouldn’t try to change existing front end JS to an FP style unless you were trying to clean up really bad code and make it more readable.

To be honest if you really want to get into FP…

Just use whatever style of programming that is best suited to your project/ framework. Take the good parts of FP, OO ect and write easy to understand/ test and debug code.

Looking at the original, it seems the Rules class doesn’t do much more than save the params its given (via assign) and set up a few helper functions, none of which actually refer to those params. This is good because they can be easily ripped out and made into simple, standalone functions - something you’ve already done, so off to a good start.

After that there are some other classes that all extend Rules, but all of these only ever define a single evalRoll method. So really, these can effectively just be that method as a function. You’re putting them in objects in your refactored code which isn’t necessary since they all simply wrap one function. Instead just make them the function. So

The problem now is getting rid of this. this would represent the current instance and the members within that instance but we’re not dealing with classes an instances anymore, just functions with simple inputs and outputs.

There’s two uses of this, one for val and one for count. count is easy, that’s a function we ripped out earlier so that can just drop the this and simply work. val is something that would be coming from the params passed into the constructor during instantiation of the class. Its another kind of input, one that would be coming from the instance rather than the arguments, but we can simply move it to be an argument input instead because we no longer have an instance. That gives us

You can then repeat this process for the other classes as well.

Since the refactor doesn’t have instances, these would instead have to be represented as functions… or do they? Wouldn’t each of these instead just calling the new totalOneNumber(val, dice) function with a different val argument each time? Well, yes, but we can also make new function versions of totalOneNumber(val, dice) with those values baked in using partial application. JavaScript can do this with the native bind() method. That would look something like this:

Now, each of these are new functions which calls totalOneNumber(val, dice) with the val pre-defined. ones, for example, would have the signature of ones(dice) and would use 1 as the value of val in its function body which is that of totalOneNumber, or more specifically something like:

Lets test it out (full script with all necessary dependencies so you can copy and paste and run somewhere):

The other classes aren’t very different and would need a similar treatment. You think you could do the rest yourself? Just be sure to not confuse the count parameter and the count function. When you’re done there should be no references to this or new. What you’ll be exporting will be a list of functions, not a list of object instances, and these functions would be used in place of instance.evalRoll() (e.g. what was ones.evalRoll(dice) would instead become ones(dice)).

Been having a play with it and did up a function that returns a score from a five number array.

Loops are more efficient than Map because they don’t create a function object every iteration.
You can also return the main function and break from a loop.

It tally’s the array for each number on the dice 0-6 into a frequency array (disregard 0).
Then loops and checks for Full House (2 + 3 of a kind), 3/4/5 of a kind.
If that doesn’t return it checks for Low and High Straight .
Failing that returns 0;

@ senocular I don’t know how to thank you for such an exhaustive and good explanation. I did a refactoring according to your suggestions and the part related to results from one to six is working properly.
This is how the code looks like now:

/** Functions for summing, counting values, and counting frequencies of dice.
*/

/** Given a sought-for val, return sum of dice of that val.
Used for rules like “sum of all ones”
*/

// ones, twos, etc score as sum of that value

// three/four of kind score as sum of all dice
const threeOfKind = sumDistro({
count: 3,
description: ‘Sum all dice if 3 are the same’
});

Now, I have a problem with functions for threeOfKind, fourOfKind, fullHouse, etc …
I got an error that occurs in the function freq.
This is the error in the console: 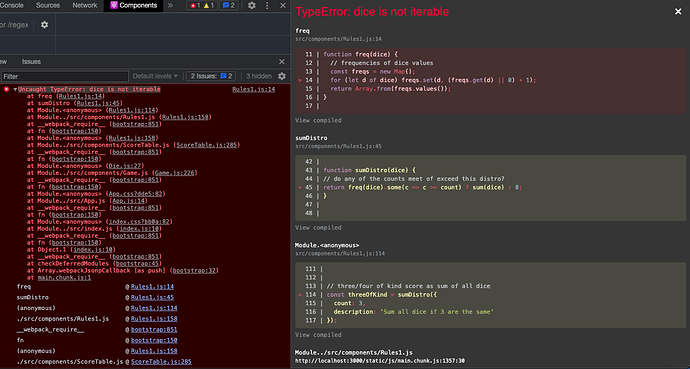 I personally find Object Orientated programming is confusing and mostly unnecessary much like about half of Functional programming (algebraic notation, point free, natural tx ect).

I tend to use a mix of procedural and basic functional programming however, I do like classes for UI components/ CSS (custom elements).

The problem appears to be these constants e.g

are calling these functions e.g.

with the wrong arguments.

BUT it’s being called with an object smallStraightFn({score : 30})

There is another problem:

In theory the functionsmallStraightFn() should return the constant const smallStraight = { score: 30, description: ‘30 points for small straight’}

After you call smallStraightFn() with an array [1,2,3,4,1] so the function verifies that the array is a “small straight”…

Assuming an input an array of five (dice numbers) and output an object with the frequencies, total and description e.g

The following block does this:

Have a play, see if you can work out what all the functions do in detail

did you finish the whole thing? Can i have a look? i’m trying to do the same with some other projects but i keep getting errors until i stumbled upon this, it may help me.

Hi @louyi - welcome to the forums

If you have a smaller code repro where you are having difficulties, it may not be a bad idea to create a new topic dedicated just to your question.