A card game based on programming?

So I caught a glimpse of these cards the other day and had the immediate reaction of, “Oh! A card game based on programming?!? Cool!”

Of course these ended up just being regular playing cards with some code embedded in their visual design.

Then I got to thinking, would it be possible to create a game with aspects of programming with regular playing cards? Or maybe a card game with specialized cards (like cards against humanity or magic the gathering) based on programming? It sounds like a compelling idea, but I immediately realized it’s hard enough to program normally with a compiler telling you when you did wrong. How would you expect that to work reliable within the context of a card game?

But then I thought some sort of augmented reality app on your phone could work as the compiler to validate your work. Phones are abundant enough, and cards should be quite easy to recognize with off-the-shelf libraries. And part of the challenge could be making a program that actually runs.

Anyway, I haven’t thought much further than that, like what kind of play mechanics would be involved, or how you could make something like this even remotely be any fun (multiplayer interactions, etc.). Just thought I’d throw it out there to see what other people thought, or maybe if anyone’s heard of something like this already - something I never thought to even check.

or maybe if anyone’s heard of something like this already - something I never thought to even check. From the invention of computer programming languages up to the mid-1970s, most computer programmers created, edited and stored their programs line by line on (punch cards or) punch cards. A punched card is a flexible write-once medium that encodes data, most commonly 80 characters. Groups or "decks" of cards form programs and collections of data. The term is often used interchangeably with punch card, the difference being that an unused card is a "punch card," but once information had been encod...

On a more serious note, I’ve seen a few AR+card related things, here one that comes to mind:

I can imagine a game where each card is an assembler/bytecode instruction, and each player plays a hand in a round where you try to optimize the output based on turn-based input. The player with the best hand would win for that turn based on evaluating the instructions.

I would like a card themed after myself. When you pull the card, an accidental infinite loop is applied and the deck bursts in to flames

Are you thinking to move forward with this AR idea and develop something?

Phones are abundant enough, and cards should be quite easy to recognize with off-the-shelf libraries.

Out of interest, what approach would you most likely take?

I like the idea of it, but if we’re being honest, I’ll probably never get around to doing it.

I’d prefer not to have to mess with AR. I think to have to use a phone would be a distraction and a complication. I think you could limit the distraction aspect if you make it an endgame component where, for example, if you have a situation where the game is over and you need it to verify the winner (the phone not being constantly used throughout the game) that could be ok. It doesn’t help with the complication part, though.

If you move away from standard playing cards, I think that gives you more freedom and opportunity to avoid having to depend on something like AR. Then you can do things like enforce what kind of combinations are possible through the design of the cards themselves - an example maybe being laying cards out in a way where shapes along their edges have to match in able to work.

Beyond that, I still think there’s a lot yet to be done just to figure out how something like this can be made to be fun. Maybe, just MAYBE, if something comes to mind that does seem compelling enough, that could be enough encouragement to move forward with something like this. And I imagine it could be prototyped pretty easily without AR assuming AR was felt necessary for it to work.

I played a very imperative programming style board game once where each of you is a robot which you give sequences of instructions to:

I think it might have been this Robot Ricochet game 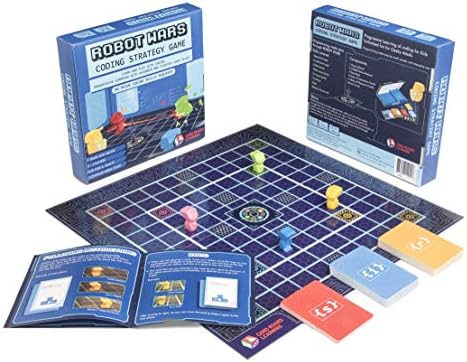 ROBOT WARS Coding Board Game - Learn and Play with Computer Programming. Geeky STEM Toy and Gift for Boys and Girls ages 7 years and up. No Prior Coding Skills Required: Card Board Learning: Amazon.co.uk: Toys & Games 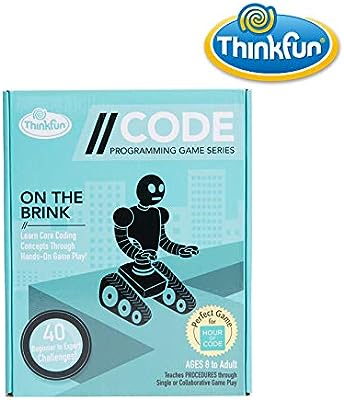