This video will only appeal to old timers (like yours truly) who were there when Adobe Animate was Macromedia Flash.

The new comers who went straight to AS3 would not relate to this video ;p ha ha ha

I think I had that box!

One that sticks in my head was some old version of Macromedia Director. It was big and heavy. It was pretty much solid books.

It is SUCH AN HONOR to have a reply from you !
I have learn so much from you back then when I was learning Flash.
Now that I am getting back to AS2 (because of this unboxing and also because I LOVE the intuitiveness of AS1 & 2) I will be reading up on all your tutorials again !

It is such an honor to hear a direct reply from you…wish we could get in contact too !

I still have Fireworks installed…lol

Yes! Me too. It feels so clunky now, but there’s something about it no one else has been able to replicate or improve on.

I must have been 15 when my dad bought Studio 8 for me.

And look at me know :lol:

I JUST started to learn Fireworks because of this Studio 8 unboxing, I was surprise it doesn’t have a “crop to layer” feature like photoshop.
Say for example that layer consist of a small square, I can’t get it to crop to just that square, I have to drag around it first…

To TheCanadian, your dad bought you Studio 8 ?!!! Your dad loves you very much

I was surprise it doesn’t have a “crop to layer” feature like photoshop.

If its not hidden around in the UI somewhere, it’d be easy to make. I’ve been known to make a few commands myself

Oh please make it, it’s the one thing I need !
It should function like this.
1: User selects a layer.
2: User click your Magic button.
Result: The ENTIRE document is cropped to whatever is the object in the selected layer [minimum bounding box.]

I should have my Flash 5 CD and box somewhere as well. This video was awesome. @bracer!

Fired up Fireworks. It’s in the Edit menu. Edit > Crop Document (in right-click context menu as well). It will crop the document to your current selection, object selection or marquee.

Kirupa !!!
Now that I am getting back into Flash because of the unboxing, I am re-reading your tutorial.
I owe so much of what I learn in so short a time to you !!!

How are you doing ?
Are you still doing Flash ?
I am back into Flash again myself.

By the way senocular, Fireworks stroke have TOO MANY Options like 1 pixel soft/1 pixel hard and a WHOLE LOT OF LIST !!!
What is the setting that best the stroke that I would draw in Flash 8 ?
Say I draw a stroke in Flash 8 pixel thick.
I do the same in fireworks no problem, but then this 1 pixel soft/hard/etc thing…wtf man.
I just want it to look exactly the same as Flash’s, Flash stroke is clean and the anti-alias is good, I have no idea what is the “feathering” of Flash’s line, another way of saying it is I have no idea what is the degree of anti-aliasing Flash is doing, 1 pixel soft ? 2 pixel soft ? 3 ? Is it soft or hard ?

I don’t care for Fireworks fancy stroke stuff, it just makes thing complicated for me.
What is the setting that matches Flash ?

You can’t really match in Fireworks what you get in Flash. The apps were developed separately by separate teams and use different rendering engines. Maybe you could find some settings that match, or at least get close to Flash’s, but I don’t know what they are. You’d have to experiment.

But there are some cool features with Fireworks strokes. Like pressure sensitivity and the scrubber tool which lets you alter that sensitivity after the path has been drawn. 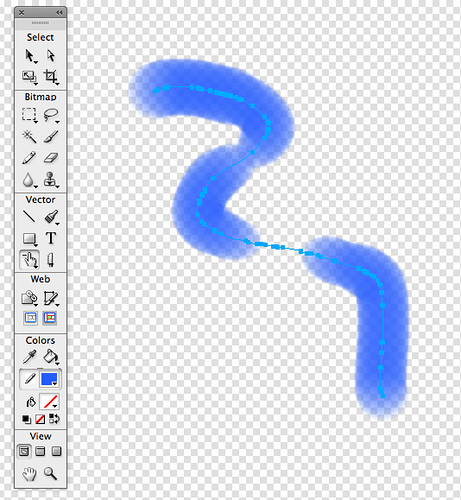 Granted, strokes are a lot more confusing there, and in more ways than just being more feature rich. I even tried to make my own stroke/brush panel to simplify things but never finished it. I wonder if that made the source dump…

Yup, there it is! 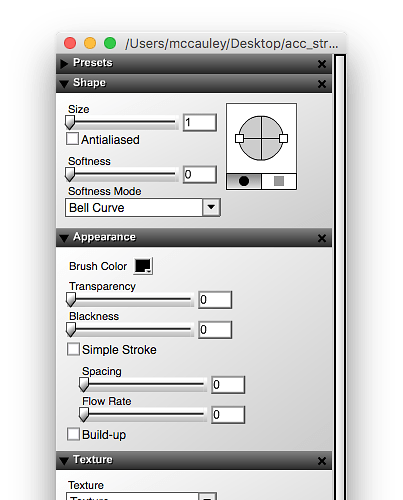 That looks like it got further along than I remember :shocked: