Has anyone played with Google cardboard or any of the VR systems?

I’m getting the impression VR stuff has fizzled out a bit from its hype a few years ago. I hope I’m wrong though.

I just strapped a piece of Google cardboard to my face w the cell phone in it… It was actually a cooler effect than I expected! A quick search looks like that project is about abandoned unfortunately.

A friend of mine has the Playstation VR, he reports that his younger kids don’t really care for it at his house (age 7-10).

Pretty sure I was promised this back in 1989!

I have an Index, so I’ve played a bit of HL:Alyx. I’ve also used some cardboard-style systems.

My main problem with the Index is that it drives fairly wild GPU temps in my system; something like 86C on an RTX 2070 at 90FPS; I’m looking to improve the airflow situation there before I explore further.

I don’t have a ton of experience with VirtualBoy, but I’m pretty sure my local Toys’R’Us had one when I was growing up; my main recollection was just some red lines against a dark background.

I tried the PlayStation VR at a friend’s and it made me nauseous.

That index half life game looks amazing. I have to get my hands on a real VR system one of these days. I guess I shouldn’t have made the fizzling out comment, I actually have no idea the state of VR or how many systems there even are

So it appears cardboard is rather dead. I would just like to point out the old running joke I’ve made about myself always finding something cool ish… only when it’s become obsolete.

Remember when I was pumping mixamo? Then Adobe heard my enthusiasm and quickly killed it as well.

Even if cardboard is dead, you can still use it on YouTube for those VR-enabled videos, right? Or is all the new content in a form that is incompatible with cardboard?

Yes you are correct, youtube has the VR button available on any video in fact, it will split the video in two for a cellphone head set, aka cardboard.

Cardboard SDK was made open-source a year ago, it was just updated a few days ago and I was able to build for it in unity, but the tracking quality seems less than for a reason unknown to me, and it’s fairly quiet looking around online, but technically is still alive and updated.

I might be wrong but I believe the chain of events was cardboard/Google VR. Samsung gear cellphone head sets, Google daydream cell phone head sets.

Samsung and Google both discontinue the head sets as a failure, SDKs stopped. Cell phone VR is considered subpar.

Cardboard SDK is made open source and is still updated for now, but lack of user base and seemingly lack of quality compared to YouTube video VR on the same device…that one could be a setting I’m unaware of but I did see complaints of that elsewhere.

I was gonna continue to play with it, anything you make can easily be brought to a headset but after some frustration and and end result that’s tracking slightly poor in comparison to other cell VR apps, I guess I’m done unless I see an exact fix for quality.

Remember when I was pumping mixamo? Then Adobe heard my enthusiasm and quickly killed it as well.

I’ve never seen anything done or updated with this… i make that comment and log in today to see: 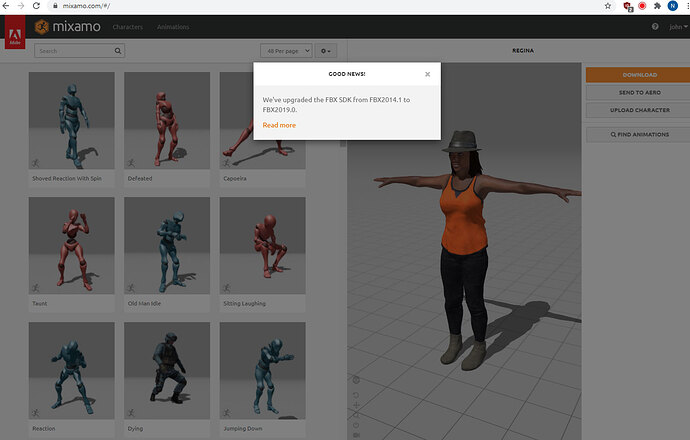 So even when im wrong im still wrong.