Hi - I just got the Windows 10 download this morning and upgraded right before I left for work so I haven’t had a lot of time to play with my new shiny toy. I was just curious if any of you had any feedback on your experience with it so far? Maybe some of you were beta testers? Any tips and/or tricks?

I’m still waiting. Worst part so far has been that, for whatever reason, GWX.exe doesn’t respect my notification tray settings and keeps forcing its way onto my tray. (Which normally looks like this, very empty:)

Your volume is so loud!

Still waiting here too. Got an email from them saying it could be days, could be weeks :blankstare:

Yeah, I am guessing I got lucky on my Lenovo. My other two computers are still waiting as well. So far the look is very different than Windows 8.1. With the addition of virtual desktops it feels slightly like a linux OS.

Despite the start menu’s return they still have moved everything around yet again, which I am sure won’t make those folks happy who were upset with how things moved in Windows 8 to have to re-learn where things are again. That said, it seems the search functionality/Cortana find just about whatever you’ve misplaced.

Another thing I have noticed so far is that my touch-pad dual-touch scroll functionality did not work once upgraded to Windows 10, on any screen. After visiting Lenovo’s website I found 4 Windows 10 driver updates (touchpad, audio, video & Intel CPU management), once installed for the touch-pad, things worked again, but a pain in the you know what for folks that aren’t tech savvy.

Still playing around with it…

Ive heard about people having troubles with their trackpads. I have one for my desktop that I’m sure I’ll have to get updates for.

As for virtual desktops, Windows has had them since XP, but if I remember correctly they were part of microsofts powertoys which I think had to be downloaded and installed separately.

I’m kind of excited for cortana. I’m sure it won’t live up to my expectations but after talking so much to my phone, my xbox, and echo, sometimes my computer feels a bit out of place (out of time).

I know this is going to sound extremely odd for me to say this as a MS employee, but my primary OS (even at work) is OS X. Win10 in Parallels works great, but ever since Office 2016 for the Mac, I’ve been using Windows less.

I’m curious, does MS buy your work computer or do you have to? 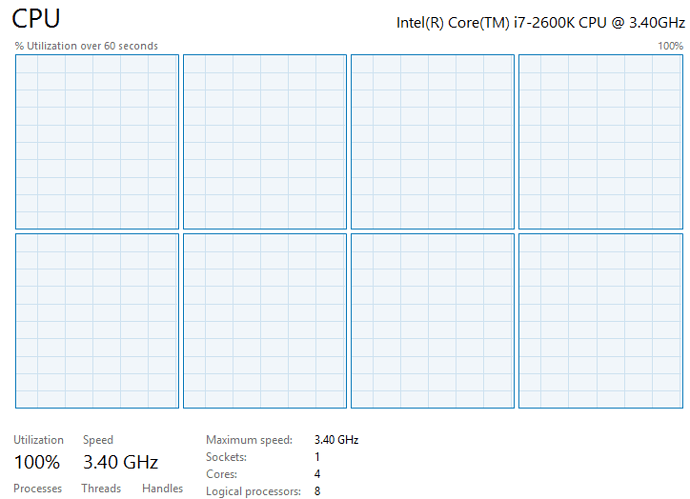 …with the culprit allegedly being the task manager itself taking up 75%. :trout:

After being out of town for a week, I came back to a desktop ready for an upgrade.

Surprisingly, my wireless track pad worked after the upgrade, but my graphics driver did not. I was greeted with a windows 10 on one monitor (of 2) at what I’m guessing was a 1024x768 resolution. I was able to update that manually enough but I could definitely see someone like my mom in this situation not knowing what to do.

The transition from Win7 isn’t so bad. This is what Win8 should have been, really (for desktop users). We see some of the tablet/phone-style tiles in the start menu which is nice, and overall the start menu seems more responsive.

I have my display extending between two monitors and noticing both monitors having a version of the start menu and taskbar icons, though the primary monitor has application icons with text while the secondary has the icons only. The secondary also has no tray icons or clock; they seem reserved for the primary.

Settings dialogs are more consistent and less scattered, but still not completely coherent. I think its probably one of the better experiences for windows in a while, but there’s still room for improvement.

Windowing has some minor improvements such as a new “Task View” icon in the task bar which will show an expose-esque view of all windows. You can also dock to the side of a monitor, not just the desktop which I love and have been wanting since the beginning. It can mean a slight hiccup when moving windows across monitors, but its totally worth it. When you dock to the side, you get a task view of other windows on the opposite side of the monitor for a complimentary view, if desired. I do have trouble discerning where title bars start and stop. I’ll often miss when trying to move windows, and its easy for windows to get lost because everything is so white. I have yet found a way to change that. Also, Chrome seems to have some issues redrawing when resizing a window in Win10. Its not catastrophic, but it does lag a bit and looks unhealthy.

I got the Netflix app from the Windows Store which was a painless process. The app runs well in a window though it does drop out of full screen occasionally, especially if something happens with another app in that same monitor, but more annoyingly it also backs out of the video into the main info page which is obnoxious. Uninstalling was a different issue. Seems like you can’t do it from the store? And store apps aren’t listed in the uninstall programs list from the control panel, they have they’re own place in the Apps section of the settings. Found that confusing.

I played with Cortana a little bit. Its very much like Google Now cards. Took me a little while to realize that the settings were in the “Notebook” section of the hamburger menu. Not quite following that one. But I have it set up now that I can just say “Hey Cortana” to activate it which is the game changer. “Hey Cortana, go to Netflix” and the netflix app opens. Woot! Now if only the netflix app (and others) was setup to recognize voice commands a la Xbox, I’d be set. Also any attempts to open a website directly seemed to go through bing which isn’t ideal. It’s also not as fun as something like Echo. “Hey Cortana, make me a sandwich” = bing search

(I guess you have more room to play with something like Echo which has a limited interface). Still need to play around with it more.

my graphics driver did not. I was greeted with a windows 10 on one monitor (of 2) at what I’m guessing was a 1024x768 resolution. I was able to update that manually enough but I could definitely see someone like my mom in this situation not knowing what to do.

I think I might have encountered that. I just remember a period where only one monitor was operating at a crappy resolution for a while, then I installed the latest Nvidia stuff for my card, and all was well.

This is what Win8 should have been, really

Thankfully, Windows 10 solved an issue for me in 8.1 where I couldn’t open the Weather app at all, so it was showing me the weather for the East Coast for ~2 years when I live on the West Coast. I would have changed it, but the weather app would crash when I launched it for unknown reasons.

The secondary also has no tray icons or clock; they seem reserved for the primary.

I don’t really get this design decision. It was the same on Windows 8, and maybe 7. Sometimes I’m running a game on my “primary” monitor, and it’s nice to know the time… so I don’t know why I can’t see it without opening a browser console and typing new Date\n. I mean, my non-primary monitor is the one that knows about HDMI and DisplayPort, but its color reproduction is significantly worse than my primary (Dell U2410 (crappy) vs 2407WFP).

The clock thing is especially dumb, because it’s not like anything else is happening on my left monitor with the space that the right monitor uses for the clock and tray.

Sorry - just noticed this response! MS bought me a computer, but I gave it back and bought my own personal Macbook Pro to use instead

Now I only have to wait for windows 10…

MS bought me a computer, but I gave it back and bought my own personal Macbook Pro to use instead

Couldn’t you have kept it and still buy yourself your own macbook?

I could have, but that other laptop would have just been sitting idle. I figured I’d rather have it go to someone else who may need it instead

There’s a Microsoft site somewhere where you can download it whenever.

MS bought me a computer, but I gave it back and bought my own personal Macbook Pro to use instead

Now I am curious. Is there something I am missing about a Macbook Pro that makes it better than say a Lenovo Carbon X1 or a similarly spec’d Windows based laptop?

My main reason is being able to jump between OS X and Windows. On a more “personal choice” front, I love the keyboard and the trackpad on the Macs.

I just recently tried upgrading my desktop to Windows 10. Unfortunately, my video card had enough and decided to quit working on me. I built my desktop back in college about 7 or 8 years ago and it was due to upgrade the RAM. Unfortunately the motherboard I had wouldn’t support DDR3+ and had a capacity of 4gb. Which also means my chipset would only work with a few older motherboards.

I did the math and by the time I got a new video card, motherboard and RAM with potential to get a new CPU I was in a deep hole. That said, I visited my local Microcenter and ended up getting a new box, an Asus G10AJ and since they had a sale on monitors too so I picked up a Samsung 34" curved monitor. Least to say, after setting it all up I am wondering how I was getting along with my custom build! Screen is beautiful and the box screams. No Windows 10 upgrade issues with this bad boy.

The best part is my custom build sounded like a 737 taking off when it started with all the fans and the new setup has liquid cooling and I have to bend down to even hear it. This is exactly why I am only allowed to visit Microcenter twice a year because I’m like a starving kid in a candy store.

I hope windows 10 does that for me…